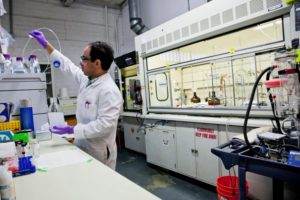 Pasadena has long been a mecca for tech firms and startups but the city’s bioscience industry is also ramping up, powered by a clustering of related businesses, research, clinical settings and talent.

A big part of the growth is being fueled by expansion.

The Los Angeles-based Doheny Eye Institute, a world leader in vision science, is renovating a 113,000-square-foot building at 150 N. Orange Grove Blvd. that once served as the global headquarters for label maker Avery Dennison, and Kaiser Permanente is building an 80,000-square-foot facility at 94 S. Los Robles Ave. that will become the Kaiser Permanente School of Medicine.

“We’re very excited to be in Pasadena because of what’s around us with potential partnerships,” Kaiser spokeswoman Mi Chelle L. Sorey said. “You have places like Caltech and JPL. There are just wonderful opportunities to do things collaboratively. We’ll be able to do learning based on what’s really happening with the general public as it relates to healthcare. We’ll be rubbing shoulders with people who are like-minded.”

The four-year school is currently hiring faculty. Dr. Mark Schuster, a researcher and family health advocate, will serve as the founding dean and CEO. The school will have 192 students at full capacity although it will start with just 48.

Doheny’s retrofitted Pasadena facility will employ about 275 workers. It’s expected to be fully operational by 2020, according to Christopher Clinton Conway, Doheny’s chief of development and public affairs. The institute looked at more than 80 potential locations, he said, but Pasadena ultimately rose to the top.

“They were looking for one tenant to fill the entire building, and they also felt that we fit in with the city’s larger plan for bioscience,” Conway said. “When you have community leaders who are actively engaging you and giving you help … well, that’s very persuasive.”

“This industry creates jobs at all skill levels, whether you have a doctorate or a certificate from a community college,” said Markle, who also serves on the board of directors for Innovate Pasadena, an organization dedicated to advancing the city as a center of technology and design innovation. “These are well-paying jobs and that’s why we care about fostering the growth of this industry.” 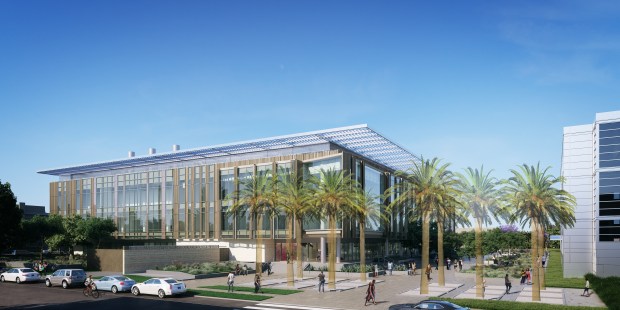 This is an artist rendering of Caltech’s Tianqiao and Chrissy Chen Neuroscience Research Building, which is scheduled to open in the fall of 2020. (Courtesy of Caltech/SmithGroupJJR)

Plenty of activity is occurring at Caltech. The school broke ground in December on a site that will house a three-story, $200 million Tianqiao and Chrissy Chen Neuroscience Research Building. The 150,000-square-foot facility, at the northwest corner of the campus along Del Mar Boulevard and Wilson Avenue, will focus on neuroscience and brain function. It will house labs, offices for administration and principal investigators and a 150-seat lecture hall.

The building is named in honor of the Chens, who donated $115 million to the university in support of advancing research in the field of neuroscience. The facility should open in the fall of 2020.

“We had the opportunity to grow and we needed more space,” President Bud Bishop said. “We have companies working on everything from spinal implants and electrodes for brain stimulation to new pharmaceuticals to treat cancer and ways of doing sample preparation for next-generation sequencing results.”

Tenants each get their own wet lab bench, storage area and desk as well as access to a variety of shared resources and equipment, including autoclaves, ultrasonic water baths, a mass spectrometer and an inverted tissue culture microscope, among other high-tech gear.

“We deal with very early-stage startups that typically have just two to four people,” Bishop explained. “When companies come here they are usually science-based and anxious to access startup money and get others interested to help them expand. We bring in mentors to talk to them so they understand all aspects of commercializing their research.”

Huntington’s operations were previously spread all over the city. The new facility brings most of them onto one campus, according to Robert Kloner, Huntington’s chief science officer and a professor of medicine at USC.

“This will allow for better collaboration,” he said. “When things are separated science tends to break down into silos.”

Technology in the palm of your hand

Huntington is involved in several areas of research, including emerging themes of brain and heart interactions and the interaction between electronic implants in the brain and tissues surrounding it. And some of the technology could fit into the palm of your hand.

“We collaborated with Caltech on the development of an iPhone app that provides a noninvasive assessment of heart function,” Kloner said. “It shines a light on the corotid atery pulse in the neck, which can assess the function of your heart. It can track the progress of different therapies and it will send that data wirelessly to a physician. It’s experimental and not on the market yet.”

Huntington’s new facility was designed by the Los Angeles-based architectural firm of Perkins+Will. Eric Aukee, the company’s managing director, said the building’s design is geared to the kind of research that goes on there.

“A big part of a building like this is efficiency,” he said. “It’s an unusual floor plan, and another factor is vibration control. When you are doing experiments with microscopes and other delicate equipment you need to be in a very firm building that doesn’t move. And researchers need to have a completely safe environment with redundancy in the exhaust system and in the way power and data are provided.”

A host of other biotech firms — some spinoffs from Pasadena incubators — are also taking root in the city. They include Arrowhead Pharmaceuticals, Auritec Pharmaceuticals. and Neumedicines, among others.

“I think our organization has done a good job of connecting across industries and academia to make people aware of bioscience and to encourage collaboration,” she said. “Now people give us tips about new startups and ideas … there is so much happening here in the bioscience area. I think Pasadena will serve as a major center of the industry.”